Miyagikyo Single Malt is a version, without mention of age, launched in 2015 by Nikka's Miyagikyo distillery. This refined Japanese whisky shows fruity and floral freshness, characteristics of the Nikka brand. The aging also emphasizes the sherry casks, bringing a beautiful depth to the natural charm of this whisky. This single malt will delight Japanese whiskey lovers!

Nose : Complex and fresh. Notes of flowers, fruits and chocolate.

Palate : Soft and light marked by notes of chocolate, fruit and malted barley. 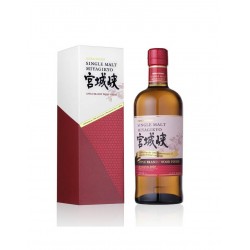