OCTOMORE 12.1 is powerful and heavily peated with a phenol level of 130.8 ppm, in other words one of the most powerful in the world. Beyond the peated notes, this single malt has only spent 5 years in American oak first fill barrels, which gives it a subtle balance between smoke and vanilla. It was distilled in 2015 with 100% Scottish barley.

It is a very limited edition.

Palate : The sweetness of the brown sugar balances with peppery notes, followed by a smoke of honey and peat moss with an orange twist. 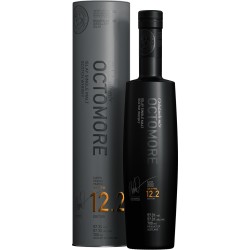